Enjoy Larry and Vivian's table read about our next chapter...

Learn more about the Legacy of Larry & Vivian Snipes

Since 1979, the Snipes have worked tirelessly to ensure access to the arts for generations of Kentucky children and families, and LCT’s Board of Directors and staff want to ensure that their legacy lives on through the establishment of a legacy fund.  While the time came for the Snipes to retire, they have not stopped dreaming of all that LCT can be.  Their hope is that a legacy fund will allow the new leadership to “focus on the work and the art and the exploration” and to take risks, but lead with “their heart and lead with their passion for what we can do.”

In the summer of 1979, Larry and Vivian were on their honeymoon when they received a call from the Board of Directors offering Larry the position of Producing Director – just a few weeks later, they moved to Lexington to begin transforming the organization into a professional theatre.  That year, LCT’s budget was $40,000.  Today, LCT is a $1,300,000 company providing arts and arts education to over 100,000 young people across Kentucky and beyond every year.  And though they would be the first to point to the hundreds of artists and administrators that have worked at LCT over the last 40 years as the cause, this is in very large part due to Larry and Vivian Snipes.

It is no exaggeration to state that over a million children have participated in programming with LCT during the Snipes’ tenure, whether they saw a touring production in their school, took a theatre school class, or came to see a play on a field trip.   Whether through working with the Snipes directly or one of the hundreds of teaching artists, directors, or interns that have proudly served under them, generations of Kentucky’s young people have had the privilege of learning the values, ideals, and integrity that have made the Snipes remarkable leaders for the last 40 years.

For Larry and Vivian, it all comes back to the young people – as Vivian says, “it’s about a student on stage finally making connections with the word and understanding that there’s meaning behind the words rather than just the words on the page.”  It is about every person finding the artistry within, learning empathy and providing opportunities, and opening young people’s eyes to the possibilities in life.  What better way to honor the legacy of a lifetime of work than ensuring that all young people in Kentucky have these opportunities?

While this chapter in LCT (and the Snipes’) story may be ending, a new one has already begun! While the community is sad to see the Snipes go, it is also a time to celebrate all they have built.  As Vivian says, “Once upon a time, a group of people got together and created a theatre.  And then…”

As of January 2021, after forty years of service to arts education for young people and the community of Lexington, Kentucky, Larry and Vivian Snipes have stepped aside as Producing and Artistic Directors of Lexington Children’s Theatre (LCT) to let a new generation of theatre artists take the reins.

To honor the legacy of the Snipes, the Larry & Vivian Snipes Legacy Fund was created in 2020. Since its creation, the LCT Family has raised nearly $60,000! LCT’s Board of Directors and staff are asking our supporters to help us write LCT’s next chapter by contributing to a fund that will sustain the theatre through the next several years, honor the legacy of Larry and Vivian, and underwrite the big ideas our new leadership will bring.

To learn more about the Larry and Vivian Snipes Legacy Fund, or to make your contribution click the link below or contact Development Director Ashlee Collins at acollins@lctonstage.org or 859.254.4546 x230.

Give to the Larry and Vivian Snipes Legacy Fund

To my fellow Young Alumni,

Generations of students, artists, educators, and friends have created theatre together here at Lexington Children’s Theatre. Those of us who have taken classes, participated in the Resident Professional Internship Program, or even performed on our stages, over the past few decades are now working young professionals and lifelong advocates for the arts.

We have experienced the impact the arts can have on a person’s life. We know that having a supportive community where you feel safe to explore and create can help a person lay the foundation to be their best self. We also know that advocating for arts education is essential and that together, our voices carry more weight!

We can show our young people that we are ready to invest in a better, more sustainable, more equitable future. I am asking my fellow Young Alumni to join the challenge by giving back this week. Join our surprise Alumni Ambassadors October 10th- 15th by:

It’s our turn to step up to the challenge and I want to help you make a plan that works best for you! Learn about all the ways you can participate in the Young Alumni Challenge by emailing me at acollins@lctonstage.org or calling 859-254-4546 x230. 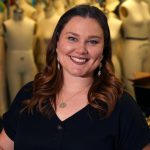