‘Twas the Night Before Christmas Synopsis

On the night before Christmas, a poet named Clem finishes preparing his house for the holiday season. As he decorates, he stops to hear the joyful tunes of the carolers outside his window and makes a wish on a star asking to experience a little Christmas magic. Clem’s wish summons the elves Fa and La. Unable to see or hear his new visitors, Clem sets to work on a new story about Christmas Eve and Saint Nicholas.

As Clem begins his writing, Fa and La become enthralled. In a moment of writer’s block, the elves give suggestions of rhymes to Clem who seems confused and lost in thought until he finds more suitable words for his poem. Fa and La attempt to make more suggestions for the next stanza by repeatedly knocking the Christmas stockings off of the fireplace. Still unable to see the elves, Clem continues rehanging the stockings until an idea clicks and he rushes to add it to his poem.

Clem soon grows tired and decides to head to bed, but Fa and La are enjoying the story so much that they begin to move objects around the room to keep the poet from turning in for the night. Despite the distractions, which he attributes to fatigue, Clem crawls into bed and falls asleep. Fa and La debate ways to awaken the poet before settling on casting a Christmas wish that allows Clem to see the elves.

The elves awaken the poet, make introductions, and explain why they have appeared. Clem then returns to his desk to continue his poem with the help of Fa and La. As the poet writes, the elves act out his words. They dance with sugarplums, snuggle in bed for a good night’s rest, and pretend to play in snow. As the climax of the poem is reached, Clem believes that Saint Nicholas has arrived only to find that it was a trick played by the elves. Using Fa and La’s playful impersonation skills, Clem is able to pen a delightful description of Saint Nicholas for his poem.

As the clock strikes midnight, the elves realize it is time for them to leave. Clem, still not finished with his poem, asks for his new friends to stay, but Fa and La assure him that he has all he needs to bring his story to an end before leaving. Clem begins to read his poem aloud and is visited by the real Santa Claus. Clem watches Santa carry out his work and fly off in his sleigh, inspiring Clem to finish the poem and wish everyone a good night. 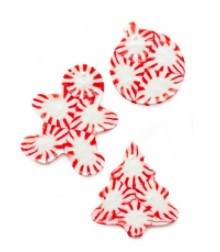 Begin by heating your oven to 350 degrees F. Then, coat the insides of metal cookie cutters with nonstick cooking spray and place on a parchment-lined baking sheet. Arrange peppermint candies – breaking them if needed. Be sure there is space between the candies.

Bake until the candies have melted, 5 to 6 minutes. Let the candies cool for 1 minute, then, with a greased toothpick, make a small hole in the candy. Let cool completely, then gently pop out of the mold.

Place a small ribbon or yarn through the hole to be able to hang your decoration!

The Season of Giving

The holidays are a time for giving and receiving. Have your students write a wish list of what they want for this holiday season. Take time to share by choosing volunteers to read their lists.

The holidays are also a time for compassion among families and communities. Ask the students to think about people in their community that are in need and make a wish list for one of them. How would the lists be different? Have a few students read from their new lists. As a class, think of ways to help people in need in the community.

Participate in a holiday project by starting a charity drive for a shelter or another charitable organization. The students may bring canned food, clothing, or wrapped toys. Encourage students to get their friends and families involved, too.

If you need some suggestions on where to find families in need, a good place to start is with the coordinator of your school’s family resource center. If your school does not have one, here are some organizations we recommend:

United Way of the Bluegrass: www.uwbg.org

Anapestic tetrameter is a rhythm in poetry used sometimes for comic verse, and prominent examples include Clement Clarke Moore’s “A Visit from St. Nicholas” and most of Dr. Seuss’s poems. When used in comic form, anapestic tetrameter is often highly regular, as the regularity emphasizes the breezy, melodic feel of the meter, though the initial unstressed beat of a line may often be omitted.

An example of anapestic tetrameter is the poem “A Visit from St. Nicholas” by Clement Clarke Moore (1823):

Dr. Seuss often used anapestic tetrameter.  Mark the words with the stressed or unstressed notation from above in the follow Yertle the Turtle passage.

On the far-away Island of Sala-ma-Sond,

Yertle the Turtle was king of the pond.

A nice little pond. It was clean. It was neat.

The water was warm. There was plenty to eat.

And they were all happy. Quite happy indeed.

Now try it for yourself. Some advice: don’t try to write anapestic tetrameter on your own, take a line from Seuss and change all the nouns and verbs.

For instance, instead of the first couplets above, you could write:

In a kitchen fantastic, in the dead of night
An egg-frying ghost gave me a terrible fright.
Transparent, and shimmery, and nearly not there,
He flipped the eggs with one hand while munching a pear.
He read from, On Writing, by the great Stephen King
And had just turned the page when I heard the toast ding.

Write a poem in anapestic tetrameter. Don’t feel constrained to make it silly. Try a horror poem, or romance, or science fiction.

“Happy Christmas to all, and to all a good night!”- Santa Claus from “‘Twas the Night before Christmas”


Did you know these factoids about the poem and Santa Claus?

Excerpts from an article from the Indiana Daily Student
BY CLARK GUDAS
Published Dec 9, 2018

Clement Moore wrote a version of how he saw Christmas, use your imagination to write “’Twas The Night Before Christmas” from a different perspective. How might the evening look from the reindeers’ perspective? Put yourself in the shoes of an elf, Mrs. Claus, a polar bear, or another character on that exciting evening. What might they be thinking? What could they be doing?

Get together with your family or friends and try and act out the poem “’Twas the Night Before Christmas.”  You could be the characters or try telling the story with dolls, actions figures, puppets, Legos, or even your friends and family!

How can you show or create can be the eight reindeer? What can you use to show the sleigh or a Christmas tree?

Film your performance and share it with the class or family!

The holidays come with many family and country traditions. Research how other cultures or countries celebrate Christmas. Do they have a version of Santa Claus? What does he (or she) look like in their stories? Do children anxiously await presents Christmas morning, or what are the other traditions that are observed?

“A Visit from St. Nicholas” by Clement C. Moore

1862 Publication of “A Visit From St. Nicholas” in the Library of Congress

“‘Twas the Night Before Christmas,” as read by Penguin authors

“’Twas the Night Before Christmas” composed by Ken Darby

One Christmas Eve many years ago, a boy lies in bed, listening hard for the bells of Santa’s sleigh, which he has been told by a friend do not exist. Later that night he hears not bells but a very different sound. He looks out his window and is astounded to see a steam engine parked in front of his house! The conductor invites him to board the Polar Express, a train filled with children on their way to the North Pole.

When John (Tolkien’s son) was three, he got his first letter from Father Christmas. From 1920 until 1943 Tolkien wrote letters, as Father Christmas, to his children. They were accompanied by lots of funny pictures. The Father Christmas Letters contains most of these letters and most illustrations (most in color).