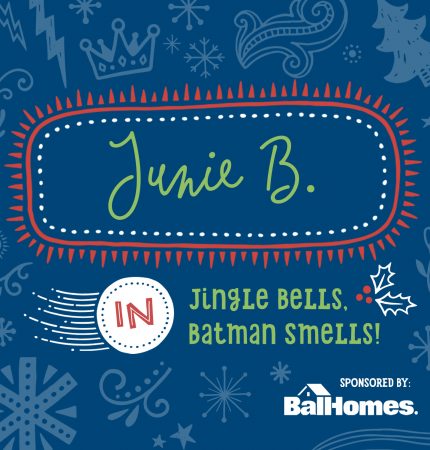 What to know before the show! 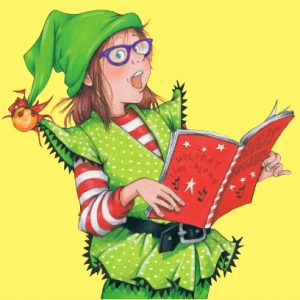 Junie B. in Jingle Bells, Batman Smells is a fun-filled combination of Barbara Park’s books Shipwrecked and Jingle Bells, Batman Smells! (P.S. So Does May). It’s time for the holiday sing-along, and Mr. Scary’s class is excited! Mr. Toot, the music teacher, has announced that Room 1 gets to be the special first grade class leading “Jingle Bells.” Junie B. would be excited, but her track record at school performances isn’t so shiny.

Earlier in the school year, the Columbus Day pageant took a turn for the worst when May and Junie B. turned the Santa Maria and the Pinta into racing ships during the performance. Junie B. ran into May, who ran into a set piece, which knocked into Sheldon, who burst into tears while Lucille, Herb, José, and Mr. Scary watched from the wings. Now Junie B. and “Blabbermouth May” still can’t seem to get along, and Mr. Scary is fed up with their bickering. If May and Junie B. get into one more fight, Mr. Scary is going to cancel the sing-along!

When Room 1 practices leading “Jingle Bells,” Junie B. decides to sing a silly version instead of the regular words to the song. All of Junie B.’s classmates think the words are pretty funny – except May. May warns Junie B. that she will tattle if she sings the wrong words again. Junie B. changes the words once more leading May to follow through on her threat. Mr. Scary decides to send a note home with each of them.

Junie B.’s mood sours even more when she pulls May’s name for Secret Santa. A trip to the Holiday Gift Shop in the Media Center cheers her up. Elf Ellen shows Room 1 gifts they can choose to buy for their family and friends including temporary tattoos, glow-in-the-dark barrettes, and the ultimate gift of all – a Squeeze-a-Burp! Junie B. wants that more than anything, but it costs $5, and she only has $5 to spend on her whole family! Luckily, she convinces Grandpa Frank Miller to give her an extra $5. Junie B. is all ready to buy the Squeeze-a-Burp when she realizes she doesn’t have enough money to buy a present for May! Junie B. and Phillip Johnny Bob decide that coal is an appropriate gift for May, since that is what Santa gives mean children.

On the day of the Secret Santa exchange, Junie B. buys the Squeeze-a- Burp and is thrilled until she starts to think about how May will feel when she gets the coal. When it’s time for Junie B. to fill May’s bag, she quickly puts the Squeeze-a-Burp inside. Everyone is amazed at the gift, and they gather around to give the gift a try. May even lets Junie B. take a turn. Peace and goodwill come to Room 1 after all.

At holiday time, people often give and receive gifts. Begin by talking with your students about the act of gift-giving. Write the words “giver” and “receiver” on the board and have students brainstorm what makes a good giver and receiver. How do you choose a present for someone? How can you show someone that you appreciate their present? What should you not do when you get a gift? Is it possible to be a bad giver? How? 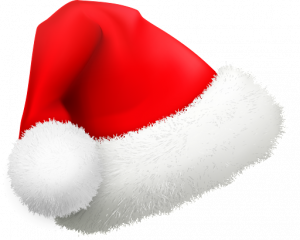 Begin by making a short survey that students fill out with their name and interests (e.g. – favorite color, favorite food, favorite book/television character, etc.). Once everyone has filled out their survey, fold them up and place them in an open container. Then let the class draw one survey each to be their Secret Santa. Explain to the students that they shouldn’t reveal whose name/survey they drew. Inform your students that the gift they give to their Secret Santa should not cost any money. It must be handmade out of craft materials you provide the class and should be something that they think their Secret Santa will enjoy.

Give students time to work on their gifts then collect them all to be passed out after seeing Junie B. in Jingle Bells Batman Smells. Once it’s time to hand out the gifts, have students try to guess who has them as their Secret Santa.

When Junie B. Jones and her classmates perform their Columbus Day pageant, each person has a role in the performance. This is true for real life theatre as well. When theatre artists create productions, there are many people involved in making the production happen. 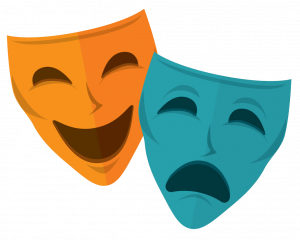 Write the following five theatre jobs on the board: stage manager, director, designer, actor, and technician. In small groups, have students come up to the front of the class and give them one of the following actions to pantomime (acting with their bodies, not their voices) that corresponds to the theatre jobs. Then, have the rest of the class guess which theatre job the group is acting out.

1.) show the actors where to stand on stage; 2.) decide which actors should be in the show; 3.) read through the script multiple times.

1.) draw what the costumes/set/props/lighting look like; 2.) do research to understand what things should look like; 3.) build small models of the set or draw renderings of what the design will look like.

1.) walk on stage as a character; 2.) memorize/practice lines; 3.) learn songs and choreography for a musical.

In the play, Junie B. has to decide what to give other people for the holiday season. Use the downloadable template below to write a letter to Santa, but instead of students asking for gifts for themselves, have your students let Santa know what they would like three other people to receive. Remember that some of the best gifts can’t be wrapped in paper!

Author vs. Playwright: What’s the Difference?

An author’s job is to write a book. They come up with the story or tell their own version of a story. A playwright takes the book and re-writes the story into a script with dialogue and stage directions that can be put on stage. Playwrights may have to change the story a little to make it a more dramatic play. Allison Gregory used three books to write Junie B. in Jingle Bells, Batman Smells! The author and playwright may have discussions about the changes – or the playwright may be able to change what ever they want.

Read Junie B., First Grader: Jingle Bells, Batman Smells! (P.S. So Does May). What parts of Barbara Park’s story did Allison Gregory change? No matter how they work together, the playwright must acknowledge that it was the author’s story first. That is why you will see Barbara Parks’ name on all of the information about the play; otherwise it would be stealing. 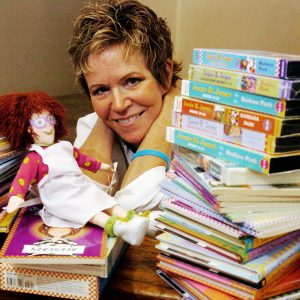 Barbara Park: Author
Barbara Park passed away in November of 2013 having over 60 million copies of Junie B. sold in North America alone. She was one of the funniest authors in recent times with more than fifty titles in print. She received over 40 awards for her books, including 25 Children’s Choice awards. Originally from New Jersey, she and her husband lived in Arizona for more than 30 years. They had two grown sons, two small grandsons, and a medium-sized dog. 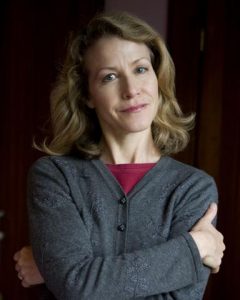 Allison Gregory: Playwright
Allison Gregory is a playwright who divides her time between Austin, TX and Seattle, WA. Her plays for young audiences include Even Steven Goes to War; Go, Dog. Go! (cowritten with her husband Steven Dietz); and Peter and the Wolf.

If you could turn any book into a play, what would it be? If you wrote a story, would you let someone else turn it into a play?

Denise Brunkus is the illustrator for all of the Junie B. Jones books. She takes moments in the stories that Barbara Park writes and brings them to life through a picture using pencil sketches. Ask your students to think about a moment in the play that they really enjoyed. Now use a pencil to illustrate that moment, including as many details as possible. Have students share their illustrations with a partner and see if they can guess the moment correctly! You can also send your class’s illustrations to LCT. We’d love to hear from you! 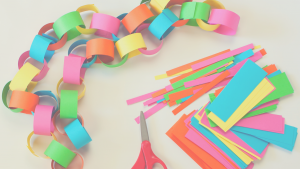 Students will then cut strips of construction paper and put them in a central location in the classroom. Any time a student sees a fellow classmate make a positive choice or do a good deed, they will write it on one of the strips of paper and give it to the person who made a positive difference. That student will then get to add it to the class paper chain! Set a goal as a class and check in at the end of each week to celebrate the positive changes! How many links can you get before the holiday break? 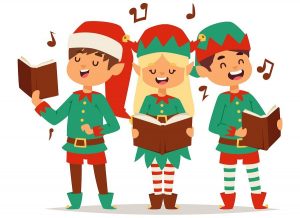 Junie B. Jones changes the words to the song Jingle Bells. Start by having students brainstorm as many holiday songs as they can think of. Review the lyrics to the songs as needed. Then divide your students into small groups and have each group choose one of the songs from the list. Have the groups change the words to their chosen song. It could become a silly song about what happens when a family gets into a snowball fight or even a song about your class! Be sure to keep the song positive and appropriate!

BONUS: Try to change an everyday song into a holiday song!

Click the link below and print the worksheet to test your students’ ability to budget for their holiday gift giving! 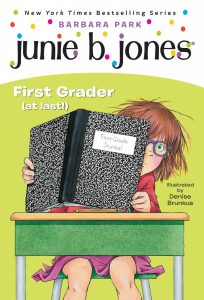 Junie B., First Grader (at Last!) by Barbara Park

Junie B. Jones has graduated from kindergarten and must learn to navigate the complex waters of a new first grade class! 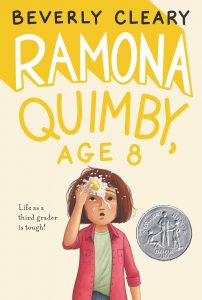 Ramona’s entering the third grade and her larger-than-life personality makes every year at school an adventure! 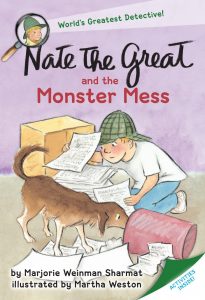 Nate the Great and the Monster Mess by Marjorie Weinman Sharmat

Nate the Great and his dog Sludge are on a mission to recover his mother’s missing Monster Cookie recipes. 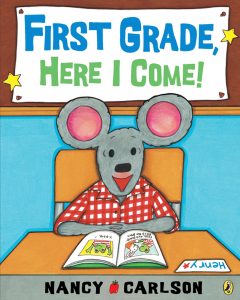 After the first day, Henry the Mouse is not con­vinced that first grade is really all it’s cracked up to be until he realizes great things really did happen on day one. 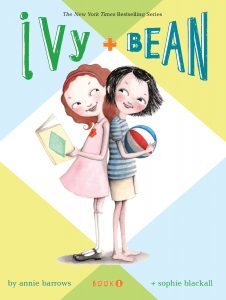 Ivy and Bean by Annie Barrows

Ivy and Bean have known from the moment they met that they don’t really click, but unexpected circumstances bring them together.