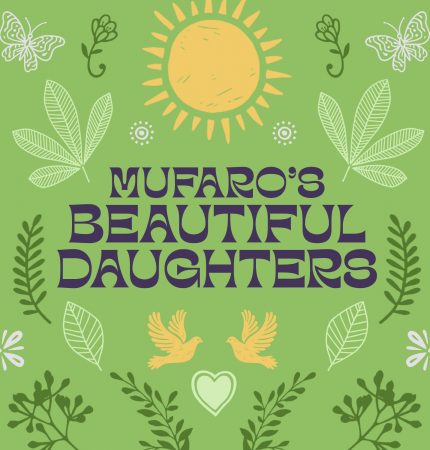 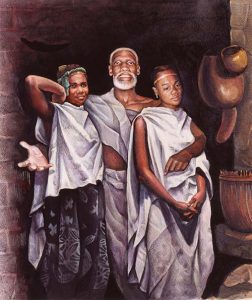 While everyone agrees that Mufaro’s daughters are very beautiful, his oldest daughter Manyara is selfish and spoiled. Her sister, Nyasha, is loved by all for her generosity and kindness. Because of Nyasha’s warm personality and gentleness, she is Mufaro’s favorite child, which causes Manyara to hate her younger sister.

When the King announces he is looking for a bride, all the eligible daughters in the village are invited to appear before him. Manyara vows to be the King’s choice and make Nyasha a servant in her court so all will know that her kindness is her weakness. One day while singing and working in her beloved garden, Nyasha is visited by a little snake known as Nyoka.  The two become good friends, and each time Nyoka visits, Nyasha happily sings to him.

Soon a notice is sent for Mufaro’s daughters to appear before the King. The night before the family is to set off on their journey, Manyara quietly leaves the village to reach the King first and convince him that she should be his bride. Manyara, having never traveled in the forest at night, meets a beggar who asks her for something to eat. She yells at the beggar, kicks him, and informs him that tomorrow she will be his queen. Manyara then meets the Old One who tells of laughing trees and a spirit with a head under his arm. Manyara ignores the Old One’s warnings and heads toward the King’s palace. She encounters the ghost the Old One spoke of, but Manyara pays him little mind and continues to the Great City.

When Mufaro and Nyasha awake the next morning, they find the oldest daughter already gone. As they travel the path, the father and daughter duo, too, meet the beggar. Nyasha, in all her kindness, gives him food. When she comes upon the Old One, Nyasha shows the Old One and the trees respect. Manyara appears as her father and sister approach the city and warns them that the King is really a five-headed serpent that did not approve of Manyara and her ways. She begs Nyasha not to finish her journey, but Nyasha feels strongly that she must present herself to the King.

As Nyasha enters the King’s chambers, she sees her friend Nyoka the snake. Nyasha asks how he got to the King’s chambers, and he replies, “I am the King, and also the beggar and the Old One. But you know me best as Nyoka. I know that you are the Most Worthy and Most Beautiful in the Land.” The King asks Nyasha to be his wife. In the end, Mufaro is pleased to announce that he is blessed with two worthy daughters – Nyasha, the queen and Manyara, a servant in the queen’s household.

FROM PAGE TO STAGE 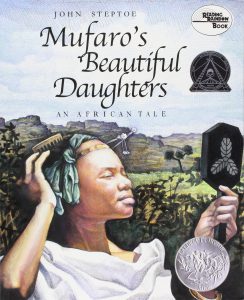 LCT’s production of Mufaro’s Beautiful Daughters is a stage adaptation of the book of the same name by John Steptoe. Books and plays are different from each other in that books are meant to be read while plays are meant to be acted out for audiences to see. Even more, books allow the reader to envision how the world of the story looks in their own imaginations, often with the help of illustrations, but plays have a group of actors, directors, and designers to bring the story to life using scenery, props, costumes, lighting, and sound.

Read the book Mufaro’s Beautiful Daughters to your class. Have the students discuss how the story can become a play. What would the costumes look like? How would you show or act out Nyoka the snake or the Old One onstage? How do you think the King can change from a snake to a human? Have students write about or draw their ideas then compare and contrast your students’ ideas with what Lexington Children’s Theatre does in their production. Are there similarities in what your class thought the actors would wear or how the snake was represented onstage?

Manyara and Nyasha are siblings, but siblings don’t always get along. Manyara is jealous of her little sister and is often unkind to her. Why? Brainstorm with your class some scenarios that could cause siblings to fight or mistreat each other. Then break your class into pairs and have one student assume the role of Manyara (or an older sibling in general) while the other plays Nyasha (or a younger sibling). Assign each pair one of the scenarios your class came up with and have them act it out. Ask the students playing the older sibling to explain why they may dislike their younger sibling. Then let the younger siblings explain their point of view. Ask each pair to work together to solve their problem in a way that is fair for everyone. If you’d like, you can have students share their short sibling rivalry scenes with the rest of the class. 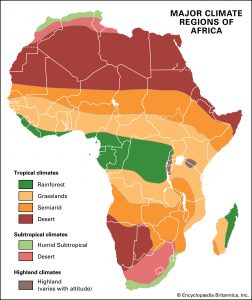 The continent of Africa consists of 54 countries, 3 dependencies (controlled by France and Great Britain), and one disputed territory (Western Sahara). The United Nations divides the continent into 5 subregions, each of which have their own landforms, climates, and ecosystems.

Begin by dividing your students into five groups and assign each group one of the five subregions of Africa:

Have students research the climates found in their assigned region. Which subregions have deserts and how do the citizens survive the heat? Where are the rain forests and grasslands? What species of animals and vegetation can be found in their assigned subregions? Have students create a presentation (brochures, poster, video, etc.) to share their newfound knowledge with the class.

PASS IT ON: THE PRESERVATION OF TRADITION AND HISTORY 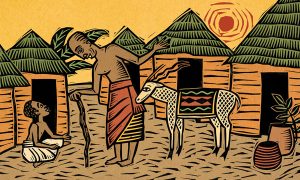 Folktales are a subgenre of folklore. They are stories passed down from generation to generation. Long before humans could read and write, they would tell stories to entertain, express warnings, and teach future generations how to perform certain tasks. Folktales are a means of helping preserve a culture’s history, traditions, and customs so they are not forgotten over time. They are also used as a tool for teaching important morals and lessons to young people. 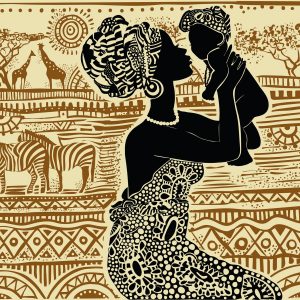 Like many other places in the world, there are a multitude of cultures found throughout the countries of Africa. Each of these cultures have their own set of stories that have traditionally been passed down by word of mouth. Villages might gather around a fire or in other community spaces after a long day of work, and the adults tell the children of the village stories. These stories are often meant to prepare the young people of the village for life.

African folktales reflect the diverse cultures found across the continent. Many of the stories are told using anthropomorphic animals that depict common human characteristics such as jealousy, pride, empathy, etc. The folktales utilize the familiarity of day-to-day life, referencing local climate, flora and fauna, and known locations around the area. This further connects the audience to the story.

To read more folktale from across the continent of Africa, check out The Anike Foundation.

AFTER HAPPILY EVER AFTER

At the end of the story, Mufaro is happy to have beautiful and worthy daughters. Nyasha becomes a queen, and her sister Manyara becomes a servant in the queen’s house. Ask your students to think of what might happen next if the story were to continue. Do Manyara and Nyasha finally grow closer? Is Manyara still jealous of her sister? What is Nyasha’s life like now that she is married and has become queen? Have students write a short scene to show what happens after the happily ever after.

ORAL TRADITIONS: A JOURNEY OF YOUR OWN 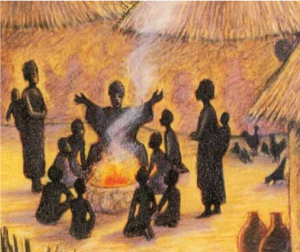 Folktales are a way many cultures use to pass down the history of their people or teach moral lessons to others. Begin by having students reflect on Manyara, Nyasha, and Mufaro’s journey from their small village to the King’s city. Who did the characters meet along the way? What lesson did the characters learn as the traveled and reached their destination? Divide students into small groups and have them imagine that they are in a place they have never been before. Ask them to create a story about who they meet, what they see, and what they learn along the way. Now that they’ve created their folktale, have each group share their story with the class to pass their folktales on to others.

Click the link below and copy the page for your students so they can write a letter to Manyara about her encounter with the king.

If you enjoy fables and folktales from different cultures, you might want to check out these books: 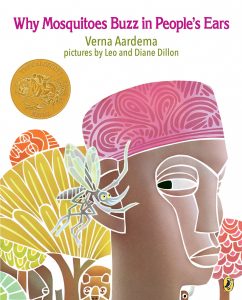 Why Mosquitoes Buzz in People’s Ears: A West African Tale by Verna Aardema

This Caldecott Medal winner tells of the origin of why those pesky mosquitoes are always buzzing in our ears. 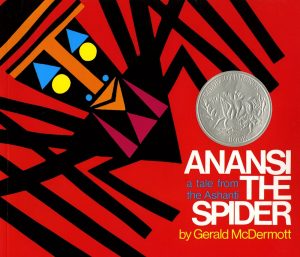 Anansi the Spider: A Tale from the Ashanti by Gerald McDermott

Anansi sets out on a long, difficult journey. Threatened by Fish and Falcon, he is saved from terrible fates by his sons. But which of his sons should Anansi reward? 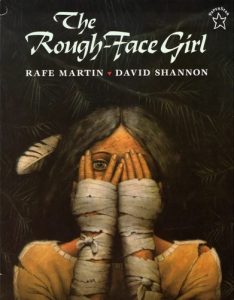 The Rough-Face Girl by Rafe Martin

In this Omàmiwinini (the Algonquin people of Eastern Canada) version of the Cinderella story the Rough-Face Girl and her two beautiful but heartless sisters compete for the affections of the Invisible Being. 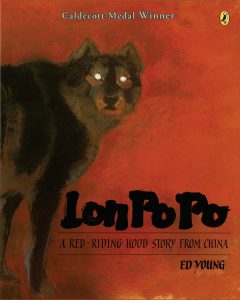 Three sisters staying home alone are endangered by a hungry wolf who is disguised as their grandmother.