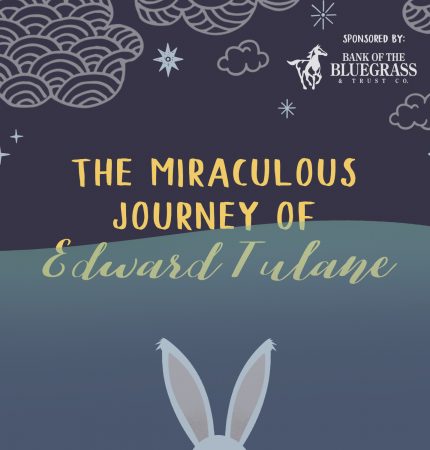 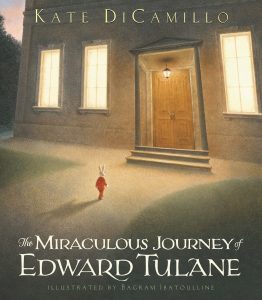 A young girl named Abilene owns a china rabbit named Edward that she adores almost as much as Edward adores himself. Though he can’t talk, Abilene’s grandmother, Pelligrena, can see into Edward’s mind and knows that he is a selfish, vain rabbit and warns him of the importance of love before a long oversea voyage with Abilene.

On the voyage, two boys steal Edward and toss him overboard where he drifts until a storm churns him up and brings him into the possession of a poor fisherman named Lawrence and his wife Nellie. They care for Edward and give him a new name, Susannah. Edward lives with them and learns the names of the constellations. When Lawrence and Nellie’s daughter comes to visit, she sees Edward. Disliking the “doll,” she takes him out to the dump and tosses him.

Edward sits covered in garbage until a drifter, Bull, and his dog Lucy find him. While traveling, Edward, now known as Malone, becomes known as a remarkable listener. When Bull and Lucy get caught drifting on a train car, Edward is tossed overboard, only to be picked up and used as a scarecrow. 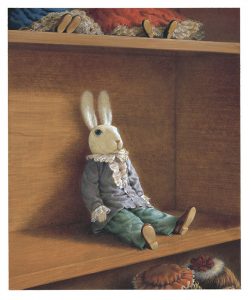 Bryce, a young boy, sneaks up to Edward late at night and steals him away for his young sister, Sarah Ruth, who has tuberculosis. All of Edward’s adventures have led up to the moment when he realizes that he loves and cares about Sarah Ruth more than himself. Bryce and Jangles, Edward’s new name, cannot keep Sarah Ruth alive. After her death, Byrce goes to a diner and orders a large meal that he can’t afford. In anger, the diner’s owner smashes Edward’s head into a countertop.

Edward awakens in a doll repair shop. He finds himself on the highest shelf, agonizing over love. “I’m done with loving. It’s too painful.” A wise old doll speaks frankly to him, urging him to find his courage and allow love back into his heart. As he finds hope again, an older woman comes into the doll shop—a woman who recognizes him. Abilene returns to Edward once more, and he spends his days afterwards dancing with Abilene’s daughter in their garden. 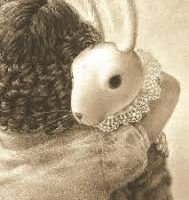 THE STORY OF YOUR NAME

Edward receives a new name every time he meets a new person on his journey. Have students ask their parents or guardians if they know how their name was chosen. Have each student share the story of their own name with a partner. If students use a nickname, they can add how that nickname came about and what they like about it. Then each student will share the story of their partner’s name with the class. Have students focus on active listening so they can recall the details behind how their partner received their name.

The Miraculous Journey of Edward Tulane contains some interesting words that we might not use regularly in our daily life. The words below are used frequently in the play:

Individually or in groups, have students look up the definition of each word. As a class, create movements or gestures that communicate the meaning or definition. Practice saying each word while doing the gesture to solidify students’ comprehension and build new vocabulary. 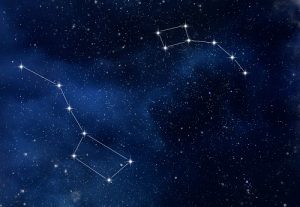 After each prompt, have students look around silently and notice how everyone is connected. There might be small groups or large connections of people. Between the prompts, have students reset and stand in their own space in the room. After the last prompt, have students ask each other the question they have thought of for that person and listen to the answer. In addition to these prompts, you can create your own to meet the goals of your lesson that day.

After the activity, reflect with your students about what they noticed about the patterns of people, who they found themselves standing close to, and how they made their own constellations. If they were to write a story about one of their classmate constellations, what would it be?

Click the link below and print the worksheet to help your students write their own monologue from the perspective of their most prized possession.

ON THE ROAD: STAGING A TOURING PRODUCTION

The creation of Lexington Children’s Theatre’s production of The Miraculous Journey of Edward Tulane is a miraculous journey all of its own. From choosing the script and casting actors to rehearsals and bringing all the designs to life, a great deal of time, preparation, and imagination goes into the realization of any theatre performance. What makes this production so special is that it tours. The actors pack everything needed for their performance and travel with it throughout the state of Kentucky and beyond. Keep reading to find out what it takes to get a stage production out on the road! 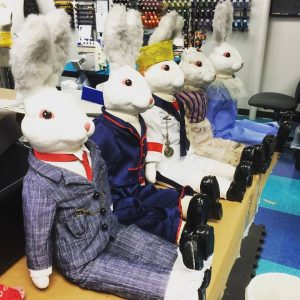 A production begins by reading and choosing scripts. The staff at Lexington Children’s Theatre goes through a series of Season Planning meetings in which they talk through what kinds of stories they’d be excited to tell. Staff members pitch show titles that the theatre might want to produce. They have to take into consideration many key factors such as target audience, budget and time constraints, cast and staffing requirements, and more. The Artistic Director then gathers what are called perusal scripts – copies of the play used to preview the story – and sends them out to the staff to read. From there, the staff discusses the scripts and narrows their choices down until they finally have a complete season. The process of choosing scripts begins at least a year in advance and can take several months to complete.

In the case of The Miraculous Journey of Edward Tulane, the staff at LCT chose the script way back in 2020 even though the show didn’t get to perform until 2022. The story excited the staff because of the change Edward undergoes in the play. He begins the story by thinking he’s the center of the universe, but as things progress, Edward comes to realize how much his world is truly connected to others.

After a show title is chosen, it will move into the design process. This is when the artistic team meets to envision the world of the play. The director of the production collaborates with the designers in each of the technical areas (scenery, costumes, props, lights, sound, etc.) to figure out how things should look. The designers complete research and incorporate the director’s ideas with their own to create sketches, renderings, and models for all of the technical elements. The process begins at least three months before a show begins rehearsals and usually takes several weeks to complete, but once the director gives their final stamp of approval on the designs, the artistic team can begin construction on their elements.

For a touring production, everything needed to tell the story must be portable. This means that the actors must be able to break things down or store items away. Everything must fit into a truck that the actors pack, much like a game of Tetris. They then drive the truck to their next performance venue, unload everything, set it up, perform the show, break it down, load it back into the truck, and head to the next location. 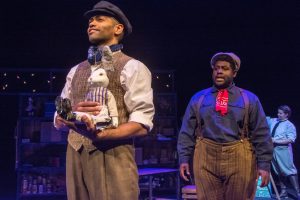 Speaking of actors, how is the show cast? LCT’s Resident Director and Company Manager is responsible for casting the actors you see in the company’s professional touring productions. The Resident Director often travels to conferences just to meet with actors wanting to audition for the company or watches audition tapes submitted online. When a show title is selected, the Resident Director makes note of the show’s casting needs including how many actors are required and other specifics such as race/ethnicity or gender. An audition or casting notice is sent out letting actors know that we are searching for actors for a show, and actors who are interested submit their materials to the theatre for review. Once the show is cast, the actors will come in anywhere from 3-8 weeks before a production opens or begins its run to start rehearsals.

In a touring production like Edward Tulane, the script calls for just four actors to play all the characters. The actors will often go in and out of character in a moment’s notice – sometimes without even changing costume pieces. It’s up to the actors, with help from the director, to physically and vocally differentiate the characters they play. Characters also have a costume piece or prop to help the audience recognize who they are. The actors spend several hours in rehearsal each day working out their blocking (where they move onstage), memorizing lines, tracking where costumes, props, and scenery pieces go, and more. After weeks of rehearsal, it’s finally time for the show to open!

The performance audiences get to see is the product of months and months of hard work. It takes about an hour of rehearsal for every minute of action you see onstage. A fully realized production takes dozens of individuals working together to bring a story to life, and regardless of performing in-house or being out on the road, the journey of a work of theatre is a miraculous one, indeed!

Click the link below and print the comic strip for your students so they can create their own miraculous journey for their favorite toy or special item!

CHARACTERS IN THE HOT SEAT 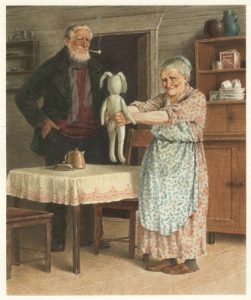 With every new owner and adventure, Edward Tulane left behind people who loved him. Brainstorm as a class the different ways each character might have responded to the loss of Edward. Have student volunteers come to the front of the class in character as a past owner of Edward. You may choose the character for the students, or have the students choose on their own. In an interview style activity, ask the character what it was like losing Edward. Feel free to allow students in the “audience” to ask questions, as well!

In the play, Grandmother Pellegrina tells a story about a beautiful, selfish princess who gets turned into a warthog. After reminding students of the plot points (included below), split students up into three groups. Secretly assign each group either beginning, middle, or end. Have them create a series of tableaux (frozen pictures) of their two plot points, including everyone in the picture (some might be inanimate objects). After they’ve completed their two images, have each group share out to the class. Have students in the audience guess which plot point they were creating. For an added challenge, try one of the following: 1.) Instead of having students in the audience guess the other groups’ plot points, see if the class can silently put their frozen images in order from beginning to end; 2.) have each character or item think of one line to say in their frozen picture. 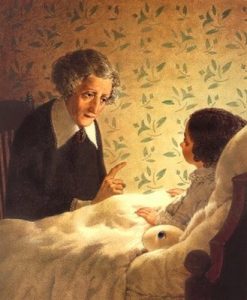 Click the link below and print the design worksheet to give your students a chance to design a costume for Edward!

If you like stories about friendship, love, and journeys of discovery, you might also enjoy these books: 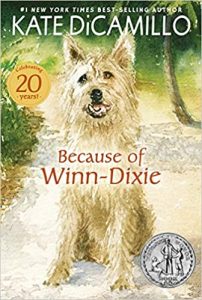 Because of Winn-Dixie by Kate DiCamillo 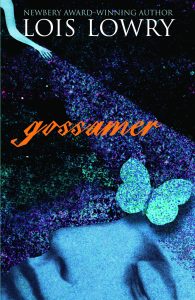 While learning to bestow dreams, a young dreamgiver tries to save an eight-year-old boy from the effects of both his abusive past and the nightmares inflicted on him by the frightening Sinisteeds. 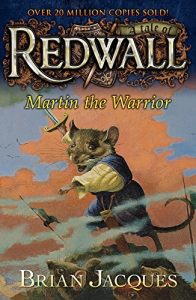 Martin the Warrior by Brian Jacques

The Redwall series captured the hearts of readers and critics alike with its exhilarating tales of the wondrous creatures of Redwall. Martin the Warrior continues the saga with the long-awaited history of Martin, Redwall’s most glorious hero, who rises from slavery to become the greatest warrior the land would ever know. 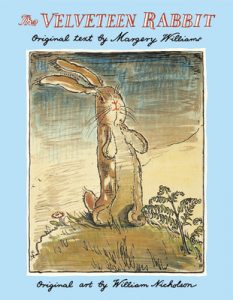 The Velveteen Rabbit by Margery Williams

By the time the velveteen rabbit is dirty, worn out, and about to be burned, he has almost given up hope of ever finding the magic called Real.